Police investigating the murder of a 53-year-old man in Linthwaite near Huddersfield have formally named the victim as Robert Wilson from Birstall.

Police are appealing for witnesses after a pedestrian was seriously injured in a collision in Headingley yesterday afternoon (Friday, 17 January).

The collision occurred at around 2.30pm on Shaw Lane at the junction with Grove Lane. A blue Volkswagen Passat was reversing when it was in collision with a female pedestrian.

The pedestrian, a woman in her 80s, suffered life threatening injuries as a result of the collision and is currently in hospital in a serious condition. 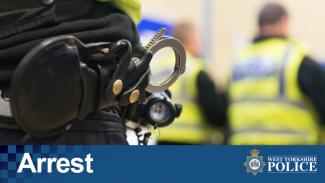 Police are continuing to hold five persons in custody on suspicion of murder and attempted murder in connection with an attack in Huddersfield.

The Homicide and Major Enquiry Team are continuing to investigate and appeal for information regarding the offence which took place at about 11.45pm on Thursday January 16 outside a business on Manchester Road in Linthwaite.

Police are appealing for witnesses following the launch of a murder investigation after two men were attacked in Huddersfield.

The Homicide and Major Enquiry Team are appealing for witnesses to the incident which took place at about 11.45pm on Thursday January 16 outside a business on Manchester Road in Linthwaite.

Officers were called to the location to a report that two men had been attacked outside the premises by several persons.

Police have released CCTV images of a male they want to identify following a voyeurism incident that occurred in a public toilet at the Trinity shopping centre.

A man had been using the centre’s east toilets at 3.05pm on November 21, 2019, when he noticed a phone camera being held over the cubicle and alerted staff.

He did not see the person involved but CCTV enquiries have identified the male shown in the images as a potential suspect. Police are appealing for witnesses following a fail to stop road traffic collision in Castleford on Friday (10/01).

The collision happened at around 10.25am on Station Road, at the junction with Jessop Street when a green Volkswagen Bora was in collision with a pedestrian on a bridge.

The occupants of the vehicle made off from the collision on foot.

A 25-year-old man and 16-year-old boy were arrested in connection with the incident and have been released under investigation.

Police are issuing an Efit of a man they want to identify in connection with a burglary in Mirfield. Detectives have released CCTV images of people they want to speak to as witnesses over a serious assault in Huddersfield. Police are appealing for information following an armed robbery on business premises in Heckmondwike.

It happened at about 12.30pm yesterday (Friday) when two males armed with an axe and baseball bat entered the premises in Albion Street and threatened staff.

Around £9,000 in cash was taken, as well as a silver Rolex watch and a black and gold Mont Blanc pen.

Police would like to hear from anyone who may recognise these males, or anyone who saw this vehicle, a navy blue Nissan Primera, in the area at the time. Police are appealing for information after a man was found dead in Bradford this morning.

At about 5.14am police were called to Canal Road, where the body of a male had been found.

Emergency services attended and confirmed the male was deceased a short time later.

Enquiries are continuing to identify the deceased, who is thought to be in his late twenties or early thirties, and the circumstances around his death.